Moving with kids: get permission before you toss a toy

Every month we bring you the personal and encouraging story of someone who has been uprooted by a move. 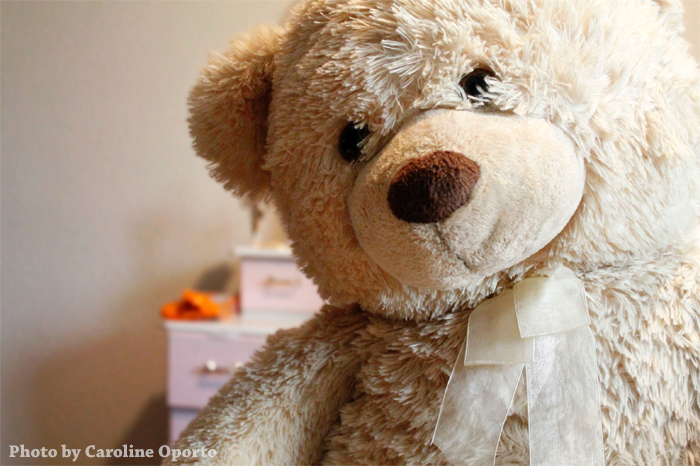 Big Teddy came off the store shelf and into our lives while I was pregnant with my first born son. He was about four feet tall with the perfect lap to sit in while reading a book or use as a pillow to take a nap. He was a nursery staple for both kids.

As the kids got older they could ride his back down the staircase or prop him as the gate and guard of a fort. He was my son's skin horse, loved until he was worn out. My daughter's velveteen rabbit. Real with love.

Scarlet Fever didn't plague our home but an illness took over, putting me in a frantic and feverish condition. It is highly contagious and can take a once sane mind and make it crazy - staging and selling a house.

Big Teddy was rehoused in a giant wardrobe cardboard box in the basement with a bunch of his friends to stage my daughter's room to look like a child didn't really live there.

The Ohio home took longer to sell than anticipated and our new Texas house had several closing delays so by the time I was unpacking our belongings, Big Teddy and his friends had been in their temporary housing situation for nearly 6 months. I was becoming as unraveled as his ear was from a tug of war with the dog. He was big, musty and my daughter hadn't asked for him. I had bought her a new giant stuffed animal horse for Christmas so I figured Buzz Light Year had replaced Woody.

I was as overwhelmed by the move, all our stuff with no basement to store it in. My brain, heart and even a portion of my soul must have still been somewhere buried in a box because I did the unimaginable. I threw out Big Teddy.

A few weeks later, when what I had done was discovered, she cried for days. She was devastated and angry. She was at the end of 2nd grade but with all the strength and conviction her little body could muster, she locked eyes with me and vowed she would never forgive me.

I hadn't just thrown away a toy. I threw away a link to her past. Her memories. A familiar friend.  I also threw out her trust in me. Her faith that her mother was always looking out for her best. I had flipped her world upside down with a move away from everything she had known. She was still grieving the loss of her friends, room, school and old life. Now I had added grieving the loss of a significant toy that could have offered stability in her shaken world. I am horrible. I couldn't forgive myself.

Despite your desire to declutter and simplify when you move, do not throw your kids toys away without their permission. It is hard for their little minds to understand all the changes going on around them, their toys are a comfort and a consistency they need to help their transition.

The tears that fell to the ground from her cheeks did not produce a nursery magic fairy to make Big Teddy real somewhere, but they did usher in a harsh reality that moms fail.

Like a good Texan who still rages over the loss of The Alamo, the resentment over the loss of Big Teddy raged in her heart for 3 years. Yet this past Sunday, as we prepared to take communion at church, the pastor prompted a series of questions on forgiveness in light of the sermon and the upcoming Easter celebration. Brooke leaned over and locked eyes with me to whisper, "I forgive you for Big Teddy".

The tears of relief that dropped from my cheeks did produce a sort of magic that only true forgiveness can produce. Grace flowed like liquid relieving the cracked ground of a broken relationship making it soft again to give restored trust a chance to grow. My heart grew wings.

Letting go of bitterness, guilt, resentment, loss, or expectations can be a freeing step in your moving process. Letting go of her anger over Big Teddy allowed more room in her heart to open up. What I did couldn't be undone but forgiveness would no longer let it split us apart.