A window into your husband’s emotions

This was written by me and my husband Bill in 2008 for a Valentine’s Day message one year before his death. I had asked him to share his thoughts on our years of moving, with the hope that it would give women insight and perspective into their husband’s often hidden feelings and emotions about moving. The message is timeless for marriages that are “on the move,” or even a gentle reminder for loving and understanding your man.

I thought this was a good time to share it again. This is my Valentine’s gift to you… 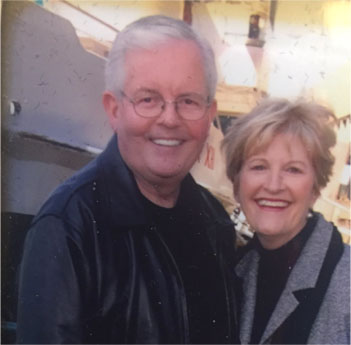 In 2008 I wrote: “As some of you know, Bill and I have been married for 43 years. We have weathered 14 moves, along with major life transitions, and huge personal changes that come with uprooting and relocating a marriage, children, home, lifestyle, and relationships.

I asked Bill to share some of his thoughts, fears, and feelings during our difficult years of moving. I hope this will give you insight to understand your husband, and know how to best encourage and love him during a move.

I feel that If I had known what was going on in his head and heart then, I would have worked harder (and prayed more) at bridging the gap between us. I am amazed and humbled to know that anything I said or conveyed through my actions during those years was received as he has described below.

God has once again reminded me of His grace by allowing Bill to see me through eyes of love and a heart of forgiveness for all the times I failed to be loving and forgiving towards him.”

In 2008 Bill wrote: “Most men don’t talk about their feelings. If we did, we would tell you that they come right from the core of a man; they address his worth, his ability to provide for, and protect his family. Although I did not address those feelings at the time, they were real, and drove my motivation, my emotions, and my behavior.

Looking back at our many moves, I recognize my feelings of impatience with our children, frustration over things not coming together quickly enough, and even anger with Susan for not meeting my selfish needs. Doubt would flood my mind. Fear would creep into my day. I often thought I had made a terrible mistake by making so many corporate moves. I would ask myself questions like, ‘Why did I ever agree to take this job (or promotion) and uproot my family? Will I succeed at my new job (or position)? Will I be a fit? What will happen to our family if the job doesn’t work out and we have to move again?’

I felt the loneliness and emptiness of starting a new job before my family moved. It was hard to spend nights alone in my hotel room, in an unfamiliar city, when everyone else at the company would go home to their family. I would question why our house hadn’t sold before we moved, and how long it would be before we would be together as a family again. I would tell myself that I would have to work harder and longer hours to make the job and relocation a successful move in my career.

Pretty tough stuff, and believe me, I’m not comfortable sharing like this.

Susan and I were disconnected by miles and emotions and I wondered if we would ever reconnect.

What I didn’t know was how to help (or fix) Susan’s emotions while treading emotional water myself. We were fighting for our own survival, gasping for air, trying to keep our heads above water.

Her words of affirmation, encouragement, and the assurance of her unconditional love for me, were her pom-poms cheering me on each day during those difficult years. Her sacrificial love covered me with God’s grace each day while she minimized her hurts while helping mine to heal.

I have learned over the years that the total disruption of a marriage and family who move takes its toll on every member of the family, but not as much as on the relationship between husband and wife.

It’s easy for Satan to drive a husband and wife apart during a difficult, stressful time when they need each other the most. He will use anything–even a move–to destroy a marriage. I would say to couples–be united in Christ, pray against anything, or anyone, that would destroy your marriage. Claim God’s promises of hope. Recognize the stress cracks, and don’t let them divide and break you.

So, grab a pom-pom, and be your husband’s cheerleader! (I know you have a pom-pom if you’ve been around Susan). And, as a matter of fact, the principles in these tips can go both ways in a marriage, although men can skip the pom-pom…

When a woman encourages her husband, she gives him confidence and hope. When a man listens to his wife, he gives her honor and value. When they mutually communicate and connect with one another they begin the journey of moving closer together in any life change.”

Then Bill added, “That’s about it in a nutshell , Susan. I sure hope what I’ve said and learned will somehow give a couple greater insight for the road ahead in their marriage.”

“I cherish you to the depth of my soul.
You are truly God’s greatest gift to me and the love of my life.
I love you with all my heart!
After all these years, I’d still follow you to the ends of the earth!
All My Love,
Your Susan”

In 2018, on this Valentine’s Day, those words are still written in my heart. I would only add: “…And one day, I’ll follow you to our eternal home, and we will be together again.”