Get in Line Every Day 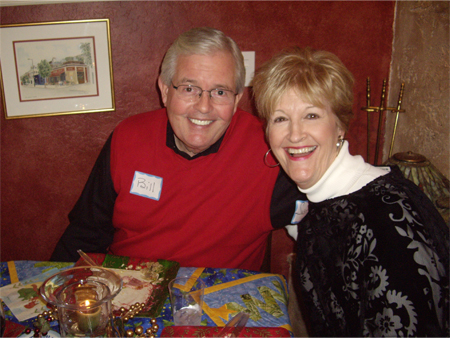 It happened years ago on a busy two-lane road that was a major thoroughfare from south to north Phoenix. My husband, Bill, was driving home from work in his small two-door pickup truck and had stopped at a red light. He looked in his rear view mirror and saw a car coming in the distance at a high speed. Bill thought the driver would see him stopped at the light and would start braking. What Bill didn’t know was that the driver had just left school and was preoccupied with the loud rock music on his radio. The driver either didn’t see the red light or didn’t see Bill stopped at the light.

He rear-ended Bill’s truck at such an impact that it flipped the truck over and into the oncoming lane of traffic, hitting a van that was also stopped at the light.

As the helicopter whirled overhead and the fire truck and ambulance arrived, Bill had to be pulled out through the shattered window of the truck. It was a miracle he survived such a traumatic accident and that no one was seriously injured. His body was embedded with shards of glass, which we continued to pick out of his skin and head for months. He had a concussion, his hand was broken, and he was badly bruised and battered from head to toe. The driver of the car that hit him was able to walk away unharmed from the accident.

When Bill was released from the hospital, he could not get in or out of bed or walk to the bathroom without my help. He was too incapacitated to go to work for several months. The physical trauma was hard, but the emotional trauma was harder. He had nightmares of the accident and was hesitant to even ride in a car, let alone drive one.

Spending days, weeks, and then months at home as Bill’s caregiver, I found myself, along with Bill, getting discouraged. Every morning as I went in the bathroom to brush my teeth and splash cold water on my face, I would stand there in front of the mirror with tears of exhaustion in my eyes and whisper to God in prayer, “Let Bill begin to heal today.”

I was reminded of the parable on prayer in Luke 18:1-8, where Jesus told his disciples a story to illustrate their need for constant prayer and to show them that they must never give up. The parable tells the story of the persistent widow who repeatedly made her request for help before a godless judge. I imagined her relentlessly getting in line every day until he responded. As each day went by I would take a small step forward as if I were in line, and whisper,

“It’s me again Lord. Is it Bill’s turn to begin healing yet?”

For us to persist in prayer and not give up does not mean an endless plea as the widow did in the parable. Constant prayer means keeping our requests continually before God as we live for Him day by day, believing He will answer. When we live by faith, we are not to give up and not to lose heart. God may delay answering or He may not give us the answer we pray for; but every prayer is heard and, in God’s infinite wisdom, answered. As I persisted in prayer, it was another step forward in the growth of my faith, trust, and hope.

It took a long time, much longer than we wanted, for Bill’s complete physical and emotional healing. In God’s perfect timing, he grew stronger and we grew stronger together. What God taught us, especially me, during that waiting time, I could have learned no other way. At that time, I personalized Proverbs 3:5, “Lean not on your own understanding, Susan. Lean on Me, trust Me. Seek My will in everything, and I will direct Bill’s path.”

You might be going through a really difficult season of life, circumstances beyond your control, or a life-changing crisis. Perhaps you too need to “get in line every day,” and persistently pray with faith and hope, trusting God every step of the way. Never give up, never lose heart!